Lease Break Clauses – Get Your Own Name Right! 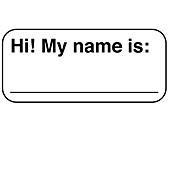 Yes it’s time to refuel your collective paranoia on the subject of break clauses again!
I’ve posted a number of times on this topic, and you can view those earlier posts here.
I looked at things that can go wrong when, as a tenant, you serve a break notice in my post Lease Break Clauses – What Can Possibly Go Wrong?
However I was recently reminded of another mistake it is possible for a tenant to make when serving a break notice – which is to serve it in the wrong name.
So this time, rather than getting the landlord’s name wrong, or sending it to the wrong address, I’m looking at what happens when the notice is served in the name of someone other than the tenant (and that person is not the tenant’s agent).
This happened in a case last year - Hexstone Holdings v AHC Westlink Ltd [2010] EWHC 1280 (Ch). The tenant had gone through a merger and announced it would be taking the same name as its parent company. The landlord subsequently sent out rent demands in the name of the parent company, but the change of name was never formalised. The tenant served a break notice in a letter on its parent company’s headed notepaper “for and on behalf of” the parent company.
The lease required notice to be given by the tenant. The fact that the landlord had demanded and received rent from the parent company was not sufficient to imply the parent company had authority to act on behalf of the tenant. The letter showed a different company number from that of the tenant, so the earlier announcement of a name change was irrelevant.
The court decided the notice had been given by the wrong person and was therefore invalid – which meant that the lease had to continue for the rest of the term.
Another expensive mistake.
The test the courts use is whether a reasonable recipient of a notice would be likely to be misled by the error.
Crucial in this context will be whether or not the break right is personal to the tenant (that is whether only the named tenant can operate the break clause, not its assignees).
Recent commentary by Sandi Murdoch in the Estates Gazette [7 May 2011] (which I cannot link to as it is behind a paywall) says that where the break right is personal, an error in the name is a mistake that could not mislead the landlord - the party named cannot end the lease and so the landlord must know that a mistake has been made and will not be confused by the notice – so the notice is valid. Kind of makes your brain hurt that, but I see what he means (I think).
But where the break right is not personal, getting the name wrong is likely to be fatal to the notice (as in Hextone) because the party named might be an assignee (albeit one who became one without the landlord’s consent) that can legally exercise the break, or it might not. The landlord will therefore be unsure who is trying to end the lease, so the notice will be usually be invalid.
You know what? Easier just to get it right in the first place!
By the way, none of this prevents someone who is genuinely an agent of the tenant from validly serving a break notice – but you do have to be able to prove that the agency exists.
Be careful out there people!
Posted by Jon Dickins at 09:37