Rent Review – The Only Way is Up 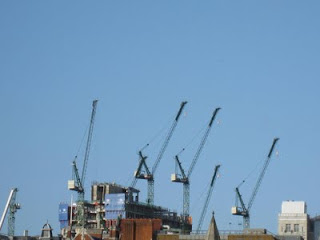 One of the most important parts of a commercial lease is the rent review clause – there will nearly always be one where the lease is for a term of more than 5 years, and there may even be one where the term is shorter.
When I started out back in the 80’s - when we went to work on horseback and the only items on your desk (apart from mountains of paper) were a ‘phone, a dictating machine jammed with mangled tape and a pile of “while you were out” messages of varying vintage – the norm was the 25 year lease with upwards only open market rent reviews every 5 years; a classic investment model.
The crucial thing about an upwards only rent review clause is that – like it says on the tin – the rent can’t go down, even if the open market value of the rent is lower than the existing rent (which these days is very often the case), in which case the existing rent will just stay the same.
Rent reviews were originally introduced to combat the high levels of inflation after World War II. They also underpin investment value because they protect the owner against fluctuations in the market.
The typical clause will set out a procedure for the parties to follow to try to reach agreement, but if they can’t, the clause will provide a way for resolving disputes, usually requiring an independent valuer or arbitrator to assess the rent on the basis of a hypothetical lease and certain assumptions and disregards.
Fast forward to the second decade of the 21st century and the most common form of rent review clause (now available for viewing on your iPhone) is still the upwards only open market kind.
Average lease term lengths however have reduced considerably. BPF/IPD figures published by the RICS showed the average term in 1999 at 14.3 years, but by 2009/10 this had come down to only 5 years – and so in many new leases there may well be no rent review at all. What is more, roughly 30% of new leases contain tenant break clauses.
Does this mean the open market rent review might be on the way out?
A survey carried out at the end of 2010 by DLA Piper for the IPF suggests not yet, although practice varies according to sector.
The UK is unusual in adopting upwards only open market rent review as the norm. In Europe, it is more common to find index linked reviews – where the rent is adjusted on the review date in accordance with the movement of an index, in the UK usually the Retail Prices Index.

The Republic of Ireland has even banned upwards only open market reviews for leases entered into after 28 February 2010 - delighting occupiers, but dismaying investors.

The UK government tried to encourage more variation in rent review methods in the non-binding Code for Leasing Business Premises in England and Wales 2007, where parties were urged to consider upwards and downwards reviews, as well as alternatives like index linking, but by and large the market wasn’t interested, although alternative methods have developed in certain sectors.
Of the various reviewing methods used, the survey found that the following ones tended to apply by sector:-
Open market upwards only – still widely used in office lets, especially in the City and West End of London where market durability makes fund managers more confident of long term performance. Tenants will often be willing to agree to this in return for other concessions. Also still widely seen in retail warehouse leases.
Open market upwards or downwards – this is a “true” open market clause, as it allows the rent to be reduced if the market is on the slide at the time of review. Very rarely seen!
Index Linked – although popular in Europe, in the UK it tends to be favoured more in new properties where there may not be enough comparable properties to assist a valuer on an open market review.
Fixed increases (set out in the lease) – becoming popular in long retail and leisure leases where the high initial fit out costs encourage tenants to seek long term commitments.
Turnover based rents – more common than they used to be, but limited to the retail and leisure sectors. The turnover rent is not reviewed as such, but it will vary from year to year depending on the tenant’s turnover at the premises. Often they have a base minimum rent, which must be paid regardless of turnover, and the base rent itself is often subject to review.
Might rent review in general be on the way out?
It is probably an exaggeration to say that, but if terms are getting shorter and break clauses becoming more widespread, then the relevance of rent review must to some extent be diminishing.
I can’t see the investment market abandoning the rent review model that easily though. If tenants want flexibility, then perhaps it’s more likely to be provided in a break clause.
And if that’s the case – tenants, make sure that if you want to operate your break clause, you do it properly. Failure to get that right can prove disastrous – which is an excuse for me to plug these posts on break clauses again!
Posted by Jon Dickins at 07:30