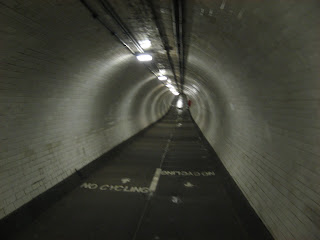 The automatic transfer of private sewers and lateral drains connected to the public sewerage system in England & Wales to the statutory water and sewerage companies will go ahead on 1 October 2011, with pumping stations to follow progressively up to 1 October 2016.
Drains serving a single property and within its curtilage will remain the responsibility of the property owner or occupier.
For more on the background to this transfer, see my July post, Down the Drain – Private Sewers to be Taken Over.
For those who want to be able to talk drainage, mastery of the following vocabulary will give you the proverbial mouth like a sewer:
·         Private sewer – a pipe that carries rainwater and/or wastewater away from more than one property to the public sewer.
·         Lateral drain – a section of pipe carrying waste water away from a single property, but which extends beyond the property boundary. Many thousands of lateral drains run underneath roads or even railways so can be problematic to fix.
·         Drain – a pipe serving a single property.
The transfer will take place under the Water Industry (Schemes for Adoption of Private Sewers) Regulations 2011 (the Regulations) which came into force on 1 July 2011.
The water and sewerage companies should by now have served notices of the proposed transfers, giving the sewer owners only 2 months to appeal against their assets being included in the transfer, if they want to do so. The period for appeal cannot be extended.
Since my last post on this subject, Ofwat has published guidance on appeals against decisions under the Regulations. You can appeal against a decision to transfer a sewer/lateral drain (within 2 months of the notice) or a decision not to make a transfer (in the latter case the appeal must be made before 30 September 2011).
The grounds for appeal are (1) the sewerage company does not have a duty to transfer the sewer or lateral drain (for example it might involve Crown land) or (2) the proposed transfer would be "seriously detrimental" to the owner.
Ofwat’s guidance says that to prove serious detriment, the appellant will need to show it would be significantly worse off, financially or otherwise. The burden of proof will lie with the person making an appeal.
Even if it is possible to show serious detriment, the decision may still be taken to transfer the sewer/lateral drain either as initially proposed or subject to conditions designed to offset or mitigate the detriment.
If an appeal is successful, with the result that a sewer is not transferred, it is likely that the owner of the sewer will have to give assurances relating to its future maintenance.
For more detail and guidance on the appeal process and decision making, see the Ofwat guide.
Drainage assets will only be transferred if they are outside the site’s curtilage. That part of the sewer that is within your site’s curtilage and which serves only your property will be unaffected and will remain your responsibility.
Defra acknowledges that with complex sites this might be a tricky issue to resolve. This is not helped by the fact that although the law and lawyers frequently make use of the term “curtilage”, there is no exact definition or mechanism by which to define the curtilage of a property.  Generally speaking it means boundary, but it might not necessarily be the legal boundary.
The fact that “curtilage” isn’t exactly an everyday word is further borne out by the fact that spell check keeps trying to change it to “cartilage”, on which I once had an operation in my knee as it happens.
Further information and guidance on curtilage and interpretation are given in paragraphs 13 to 22 of a separate guidance issued by Defra. That guidance also contains a useful summary of the transfer process as a whole.
Whilst appeals about whether particular sewers or lateral drains should be transferred will rest with Ofwat, where there are disputes about the curtilage and whether it relates to the legal boundaries of a property, that will be a matter to be determined by the courts or by the The Upper Tribunal (Lands Chamber), which is the successor to the plain old Lands Tribunal.
I wonder if there will be many appeals?
In a large number of cases the transfer may be welcome because it will mean you are no longer responsible for the upkeep of the sewer or lateral drain – that responsibility will pass to the water company.
Yes, before you all write in to complain, the photo used to illustrate this post is not a drain (you try finding an interesting drain shot!) but is of the foot tunnel under the Thames at Greenwich, a propos of nothing other than it is a tunnel.
Posted by Jon Dickins at 08:30

Email ThisBlogThis!Share to TwitterShare to FacebookShare to Pinterest
Labels: Drainage