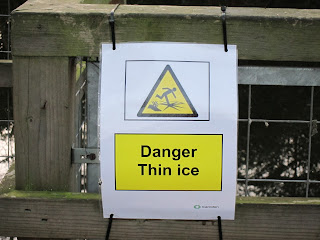 Break clauses can leave you skating on thin ice.
Two recent cases from mid-winter once again show the importance of scrutinising the detail of a break clause and scrupulously keeping up to date with payments of rent and interest, if that is what the clause requires.
The first case, from 23 November 2011, is Quirkco Investments Ltd –v- Aspray Transport Ltd [2011] EWHC 3060 (Ch).
The break clause was conditional on there being no arrears of rent and no other outstanding breaches of covenant on the break date, which was 18 December 2010.
In November 2010 the landlord sent an invoice for the insurance premium for the next year.
The tenant was required to pay such sums as the landlord may “from time to time expend in insuring”.
The tenant refused to pay the insurance premium because it covered the period after it was due to vacate under the break clause.
As it happened, the landlord’s cheque to the insurance broker went missing so the landlord’s broker paid the premium on behalf of the landlord, but before the break date.
The court decided that the landlord could not demand payment for the insurance when it had not yet “expended” the amount itself (the broker had).
There may be other reasons why the break clause had not been validly exercised (as it required the tenant not to be in material outstanding breach of covenant), but this was not one of them.
The second case, from 19 December 2011, is Avocet Industrial Estates LLP –v- Merol Ltd [2011] EWHC 3422 (Ch).
This time the tenant was not so lucky.
The tenant had a right to break on a certain date.
The break was conditional on all payments due under the lease being paid.
During the lease term the tenant had paid its rent by cheque and had often been a bit late with its payments.
The day before the break date, the tenant gave a cheque to the landlord for six months’ rent and said it had paid all outstanding charges and was not aware of any breach.
The landlord argued that payment had not been made because it had not received cleared funds.
The landlord also said there were other payments still outstanding because the tenant had not paid interest that was due under the lease for payments of rent that had been paid late in the past, even though the landlord had not issued any demands for payment of that interest.
In this case the court decided that because the landlord had consistently agreed to accept cheques as payment for the rent, there was therefore an implied agreement that the landlord would accept payment by cheque of sums due under the lease; so the landlord could not object to receiving a cheque immediately before the break date.
However, it was the matter of the missed interest payments that saw the tenant plunge through the metaphorical thin ice.
The court said the tenant had owed interest because of the late payments of rent. The lease did not qualify the landlord’s entitlement to interest by requiring the landlord to serve a prior demand for it and the tenant would have been able to calculate the interest due without any difficulty.
The judge acknowledged that this was something of a “trap” for the tenant.
Because the tenant had not paid the interest that was due, even though it had not been demanded, a payment due under the lease had not been paid and so the break clause condition had not been satisfied.
The tenant, as a result, was not able to end its lease and remained in the hook.
The fact that the amount of interest outstanding was only £130 made no difference – which led the judge to conclude:

“However, it was not suggested that the size of the amount allowed one to ignore non-compliance... I consider that the result in this case is a harsh one but, applying legal principle, it is one which I am obliged to reach.”

For more about break clauses generally, here is a link to my other posts last year.
As well as highlighting the point made in previous posts about the need to exercise extreme care when exercising break rights, the Avocet case also demonstrates the need to scrutinise carefully your records of payment to see if any interest payments are due to the landlord.
Posted by Jon Dickins at 09:25