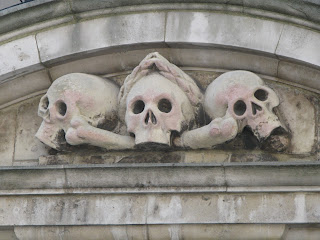 Whilst most people interested in parliamentary goings-on may have been transfixed yesterday by the latter-day sport of Chief Whip baiting, those inclined to a more medieval persuasion were treated to a debate on chancel repair liability.

Chancel repair liability was featured on this blog recently in my post One Foot in the Grave.

Peter Luff MP has a special interest in this area and raised it yesterday in the Commons. He says he has seen evidence of a “rush of registrations” on behalf of the Church.

He estimates about 500 parishes and potentially 15,000 individuals could be affected by the risk of chancel repair liability.

There’s not much sympathy from the minister, Helen Grant, however.

She said: “Chancel repair liability is a long-standing interest in land under the law of England and Wales, and the Government have no plans to review the law relating to it.”

You can read the debate if you want to follow the reasoning, such as there is, behind that decision and here is a very good summary by Paul Hayek, a solicitor who's taken a close interest in this subject.

The Parochial Church Councils are in a difficult position as the law currently stands, both from a public relations and a legal perspective.

Their members don’t have a free hand in grappling with this issue.

A PCC is a charity so its members are subject to the usual duty of charity trustees to exercise their powers in its best interests.  They can't therefore simply choose not to register or enforce chancel repair liability.

The Charity Commission has warned that if they don't register in time, individual members of PCCs could be liable for the repairs or even found to be in breach of their legal and fiduciary duties as trustees.

The deadline for registering chancel repair liability creates a tension between the interests of the Church and landowners.

The Church says it has financial responsibility for 45% of the nation's Grade 1 listed buildings and many other architecturally important churches.

70% of repair bills are met by local fundraising, with only a minority coming from English Heritage, lottery funds and other non-church sources.  This places a considerable financial burden on PCCs, which largely rely on voluntary giving to support their work.

Against that background, the Church says it can't be expected to forego sources of funding to which it's entitled unless it receives adequate compensation.

The policy of English Heritage has traditionally been that it won't provide grant aid to a PCC in respect of repairs to the chancel of a church where there's a lay rector who is responsible for its repair.

However, responsibility for grants for places of worship is to be taken over by the Heritage Lottery Fund (HLF) with effect from 1st April 2013.

The HLF has said it won't continue with the blanket policy that considers chancel repairs where there's a lay rector to be outside the scope of grant aid.

Instead, the HLF intends to take account of the financial needs of the applicant with regard to future development plans for the long-term sustainable use of the building and also to be realistic about their ability to fund raise.

The HLF says it won't encourage PCCs to pursue chancel repair liability on occasions where it's “evidently unreasonable for them to do so”."

Although some might sympathise with the position the PCCs find themselves in however, it's surely a nonsense, or even an outrage, that your property can forever be blighted by a liability that has its origins in the Reformation.

The government could have cut through all this by abolishing the liability altogether and compensating the Church.