In the City - Charter Streets 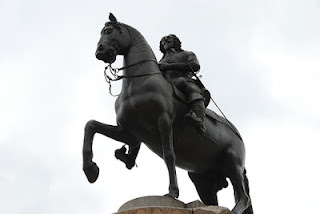 “I wandered through each chartered street,
Near where the chartered Thames does flow...”

One of the longest running property disputes of all time must surely have been the disputed ownership of the City of London’s charter streets.

Dating from 1667, the dispute was only finally settled in 2009, with consequences that are still relevant to developers in the City today.

The network of streets, alleys and passages in the City dating back to before 1667 are known as “charter streets”.

Ownership of the charter streets was, for 342 years, disputed between the Crown and the City of London Corporation (CLC).

The Crown’s claim was based on a charter granted in 1638 by Charles I (during his doomed attempt at absolute monarchy), in which the Crown granted the CLC all the buildings and encroachments on streets in the City, but reserved the streets and other parts to the Crown.

The CLC, for its part, claimed ownership of the streets under the Rebuilding of London Act 1667, passed in the aftermath of the Fire of London in 1666 (which destroyed 13,200 houses, 87 parish churches, St Paul’s Cathedral and most City authority buildings).

The CLC claimed the 1667 Act transferred title in all common streets and highways of the City to the CLC.

It was a claim that was never accepted by the Crown.

This was a considerable thorn in the side of developers, as for over 300 years it meant that if a proposed development affected a charter street, they had to negotiate with both the Crown and the CLC – causing considerable delay and expense (although in more recent times the CLC would negotiate on behalf of the Crown and split the proceeds of any deal struck with developers between the CLC and the Crown in a way that wasn't usually disclosed to the developers themselves).

The centuries old dispute was eventually settled, not by incontrovertible legal argument, but instead by the more straightforward device of the Crown selling its interest in the charter streets to the CLC in 2009.

Developers must still identify whether a charter street is affected by a proposed development and negotiate terms with the CLC (in its capacity as private owner of the street) if they want to acquire part of it or for new buildings to encroach on, overhang or undershoot a charter street – but at least, thanks to the 2009 sale, they no longer have to negotiate with the Crown as well.

Identifying charter streets however has not always been an easy task.

To be a charter street, it must have existed in 1638 and have been situated within the boundaries of the City at that time.

There’s no public map identifying the charter streets which will determine whether or not the developer needs to negotiate with the CLC.

For many years before the Crown sold its interest, the way the charter streets were managed was positively Kafkaesque.

No one else had a copy of the plan, so developers’ lawyers would only start to hear of a problem when they applied to register a dealing and were then met with an objection from the Crown.

Things eventually became more open when the Crown started lodging cautions against first registration against each charter street, which would show up on an index map search and alert developers’ lawyers to their existence at the outset.

Lawyers must still search the index map to find out whether there is a caution against first registration or whether the streets have been transferred into the CLC’s name.

The CLC website is silent on the subject of charter streets altogether.

The terms of any permission offered by the CLC may vary from transaction to transaction, and will involve negotiating the price and duration of the arrangement and any covenants to be imposed.

Developers will of course also need to deal with the CLC in its capacity as public authority in relation to matters such as planning and construction, and may also need to consider stopping-up orders (terminating public rights of way) and the release of any private rights of way.

I wandered through each chartered street,
Near where the chartered Thames does flow,
A mark in every face I meet,
Marks of weakness, marks of woe.

In every cry of every man,
In every infant's cry of fear,
In every voice, in every ban,
The mind-forged manacles I hear:

How the chimney-sweeper's cry
Every blackening church appals,
And the hapless soldier's sigh
Runs in blood down palace-walls.

But most, through midnight streets I hear
How the youthful harlot's curse
Blasts the new-born infant's tear,
And blights with plagues the marriage-hearse.

Photo by Chalkstream via flickr
Posted by Jon Dickins at 08:30