Street Art – Who Owns It? 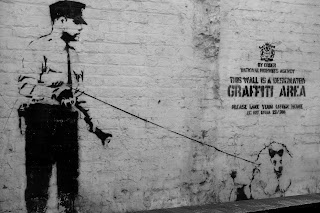 As someone who’s spent quite a lot of time over the last few years looking at and photographing street art around London, I was particularly interested in reports of a recent High Court decision on who owns that street art – sufficiently so as to be roused from my recent blogging slumber.

Although the subject matter of this case is art, it’s really an examination of landlord and tenant law – specifically, if a tenant removes something from a building, who owns the thing that’s been removed?

The short answer is it depends what the lease says (as you’d expect) and how much the thing’s worth (which might come as more of a surprise, turning as it does on value rather than purely principle).

The now famous, albeit pseudonymous, Banksy had drawn a mural on a tenant’s wall in Folkestone – the piece is known as “Art Buff” and depicts a woman wearing headphones staring at an empty plinth – without either the landlord’s or the tenant’s  prior knowledge or consent, during a public art festival.

It was painted over – “buffing out” – an earlier piece of graffiti (the judgement uses the no doubt correct singular term “graffito”, but I can’t help thinking that just looks pedantic).

Not surprisingly it attracted a great deal of press attention and the Council, seemingly without any authority to do so, protected it with a sheet of Perspex.

The tenant removed the mural (and the wall itself) and shipped it off to New York in order to offer it for sale on the lucrative Big Apple art market.

The question before the court was who owned the wall (and mural), the landlord or the tenant?

In other words, who was entitled to a spectacular windfall of around £470,000 (if estimates are to be believed) from an art deal?

Incidentally, the motives of the tenant appear to have been benevolent as in evidence they said that they’d intended to donate the net proceeds of sale to a trust established by their late founder for the care of terminally ill patients – an important observation as some reports I’ve read of this case might leave the impression the tenant was acting out of pure greed.

The 20 year lease expires in 2022. The tenant, Dreamland, operates an amusement arcade from the building.

The lease demises the structure and exterior of the property, with standard obligations to keep it in good and substantial repair and condition and to yield it up in such repair at the end of the term; as well as to restore and make good any external rendering and not to maim or injure any of the building’s walls or make any alterations without the landlord’s consent.

The tenant tried to argue it was obliged to remove the mural as part of its repairing obligations and that, once removed, it became a chattel and its own property in accordance with an implied lease term.

The High Court disagreed and suggested that removing the wall rather than simply painting over it was not a reasonable way of complying with the repairing covenant.

The Court ruled that the term to be implied in the lease is that the chattel becomes the property of the landlord, for the following reasons:

·         Every part of the property belongs to the landlord. The tenant only has a tenancy for a period of time, so it’s for the tenant to show that it’s proper to imply into the lease a term which leads to a different result.

·         The mere fact that the tenant is discharging its repairing obligation doesn’t lead to the implication it acquires ownership of a chattel.

·         Even if you could imply a term of ownership of waste or chattels with scrap value, it doesn’t follow one should be implied for ownership of a chattel with substantial value.

·         It doesn’t make any difference that the value is attributable to the spontaneous actions of a third party. Someone gets a windfall, and the landlord has the better right to it than the tenant.

So if the thing removed is scrap, it probably belongs to the tenant. But if it’s of high value, it is the landlord’s.

This decision doesn’t help in knowing where you draw the line between what’s scrap and what’s valuable.

It arguably places tenants in a difficult position.

A lot of street art – or graffiti, depending on your point of view – may well be of no value, or rubbish if you want to put it that way.

But equally a lot of street art has great credibility in the art world and prints and reproductions of it sell for significant amounts.

How is a tenant who has little knowledge or interest in such things to know the difference?

If the tenant ignores it and does nothing, the landlord would be able to argue it’s in breach of its repairing covenant.

On the other hand, how pleased would the landlord really have been in this instance if the tenant had simply painted over the Banksy mural (which the Council had anyway protected with Perspex)?

Simple and practical rules may be desirable, but are difficult to formulate when considering repairing obligations.

As the judge points out, even the most conventional and common repairing covenant can give rise to “nice questions of judgment” in particular factual circumstances.

The Council's decision to cover the mural in Perspex is interesting too. They seem to have treated the wall as part of the public realm rather than as private property - presumably because a famous artist-in-disguise chose to draw on it.Graffiti by the less renowned is more usually treated as criminal damage.

And what about the rights of the artist to the intellectual property in the art?

That wasn’t considered in this case, save for a comment at the beginning of the judgement that the copyright in the artistic work “prima facie belongs to Banksy”.

In the past Bansky has condemned the removal and private sale of his artworks as disgusting.

The Landlord had assigned its title to the artwork (and the cause of action in this case) to the Foundation, which now intends to put the mural on display in Folkestone.

* The Creative Foundation v (1) Dreamland Leisure Limited (2) Jeremy Michael Godden and (3) Jordan Harry Godden [2015] EWHC 2556 (Ch)
UPDATE 2 OCTOBER 2020 - A happy ending - "Art Buff" was finally taken out of storage and put back on display in Folkstone in September 2020. Here is a piece by Boodle Hatfield who were invloved in the dispute.

The photo used to illustrate this post isn’t connected with this case. It’s a Banksy drawing on Rivington Street, Shoreditch.