Heaven and Hell – Airspace and Subsoil in Leases 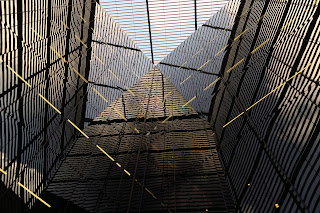 How can you determine whether a lease of a building includes the airspace above it or the subsoil below?

Two recent cases provide an opportunity to revisit this question.

First let’s return to some Latin I quoted in a blog post way back in 2011 (Latin being the lingua franca of legal blogging in those far off days):

“A colourful phrase often upon the lips of lawyers since it was first coined by Accursius in Bologna in the 13th century”, according to Justice Griffiths, in Baron Bernstein of Leigh v Skyviews and General Ltd [1978] QB 479, in an all too rare example of judicial humour, in land law at any rate.

This is the legal presumption that normally applies if you own the freehold and means the owner of the land owns everything up to the sky and down to the centre of the earth, or more poetically, “for whoever owns the soil, it is theirs up to heaven and down to hell.”

It’s not quite as simple as that, as the rights of an owner in the airspace above his land are limited to such height as is necessary for the ordinary use and enjoyment of the land and the structures upon it; above that height the landowner has no greater rights in the air space than any other member of the public.

And rights underground may be limited for example by third party ownership of mines and minerals.

When it comes to leases however, it’s not so straightforward.

The legal presumptions apply more readily to freehold than to leasehold, and first you must start with what the lease says is included in the demise and take into account the nature of the premises.

If the lease is of the whole building, the general rule is that the demise includes the airspace above it, unless the lease expressly excludes it.

That’s also normally the case if the lease is of the upper portion of the whole building including the roof (again unless the lease expressly excludes the airspace).

However, there are no clear presumptions relating to divisions of individual parts of a building, and if a building is divided up vertically, for example in a mansion block where the roof is over several flats next to each other and is not demised to one tenant, the individual demises are unlikely to be deemed to include the airspace in the absence of any express wording.

So, there’s a distinction between a top floor flat where the demise includes the whole of the roof against a demise that includes only part of the roof where its use could have an impact on other tenants in the building.

In practice, leases in buildings such as mansion blocks are likely to be internal only demises, excluding the structure, but there can be exceptions.

Why does this matter?

As a landlord, you might want to build into it (by adding, say, another floor to the building), or to let part of it out to telecoms companies for phone masts, or use it for siting solar panels, to give a few examples. You can’t do this during the term of the lease if the airspace has been demised to the tenant, unless the lease contains express reservations to do so.

As a tenant, you too might want to take advantage of being able to extend upwards (if the lease and planning permission otherwise allow it), and you need the roof and airspace to be included in your demise to be able to do this.

Therefore, it’s important to make sure that airspace is dealt with expressly in the lease.

In the recent case of Ralph Kline Limited v Metropolitan and County Holdings Limited [2018] EWCH 64 (Ch) the High Court held that on a proper construction of a lease of a whole building, the demised premises included airspace to the extent that is required for the ordinary use and enjoyment of the premises. The facts are too complex to recite here, but the case report provides a useful analysis of the case law to date.

If the lease is of the whole building, the general rule is that the demise includes the subsoil beneath the building, unless the lease expressly excludes it.

However, the High Court, in Gorst v. Knight [2018] EWHC 613 (Ch), has recently taken a rather different approach when determining whether a lease of part of a building includes the subsoil than might be expected when looking at the airspace cases for analogy.

Given the proliferation of basement conversions in urban areas, this case will be important for developers to consider.

The case concerned a ground floor and basement maisonette. The Court held that the long lease did not demise the subsoil and so the tenant had no right to excavate the basement area to create additional living space.

The lease defined the premises as:

The lease also contained an interpretation provision stating that "maisonette" included “reference to the foundations and the void or cellar below the ground floor”.

There appears to have been a single model form of lease used for both the upper and lower maisonettes in the building, which meant that the lease contained some provisions which were meant to relate to the upper flat only, and some only to the lower flat. This was not fundamental to the interpretation of the lease, but it’s a sloppy form of drafting that’s best avoided.

The cellar was only five feet high. The tenant applied for and obtained planning permission to dig into the subsoil to increase the depth by another four feet to create a useable living space.

The question for the Court was who had the right to the subsoil, as this was crucial in determining whether the landlord was obliged to act reasonably in deciding whether to give consent to the alterations (if the work was held to be within the demise), or whether digging down would amount to a trespass which the landlord could prevent (if the work was held to be outside the demise).

It’s worth repeating the observations made by the Court.

·       The Court confirmed the legal presumption that the owner of land owns not only the surface of the land but also the airspace above and the subsoil below it.  Applying that presumption, the Court held that in this case the landlord's freehold interest included the subsoil, so the landlord had the ability to demise the subsoil to the tenant if it so wanted.

·       When considering leasehold interests, it’s helpful to consider whether the drafting refers to horizontal or vertical divisions of the land. Where a property is demised vertically (say a garage or a terraced house) it’s more likely that the demise will be seen to be vertical and include the airspace and subsoil, although not with vertically divided top floor flats.

·       Where the drafting refers to horizontal splits (for example, that the demise comprises the first and second floors of a building) case law indicates that where the demise includes the roof, it’s also likely to include the airspace above, but this may not be the case where there are multiple leases split vertically along the roof.

·       There are differences between subsoil cases and airspace cases:

o   Access to the subsoil is more difficult and will generally involve going through the lowest demise in the building (although not invariably so).

o   Subsoil isn’t visible and open to the elements as the roof is, so a problem won’t be easily noticed at an early stage.

Therefore, the Court was reluctant to apply the authorities (the case law) concerning the roof to the subsoil without further consideration.

The Court’s decision was based on its interpretation of the lease, rather than applying any legal presumptions, and the Court found that on its true construction the lease did not demise the subsoil to the tenant.

·       The definition of the premises referred to the Building, which was the physical structure on the site and did not include the subsoil.

·       Although there was an interpretation provision adding the cellar to the demise, that was not sufficient to include the adjacent subsoil.

·       The rights granted to the tenant in the lease included rights of services through neighbouring or adjoining landlord's property, which the Court said would include the subsoil if it were not included in the demise. “Whatever the limit is, whatever is under it is self-evidently not demised”.

·       The fact that there was a landlord’s reservation of a right to pass services under the demise suggested that there must be a lower limit to the demise, and so it could not include the subsoil.

The key point in all of this is that when granting, or accepting, new leases of ground floors and basements you need to take care to state expressly what is included in the demise.

That also applies equally to leases of the upper parts and airspace.

Provided the drafting is clear, there will be no need to risk relying on past case law and whatever presumptions may, or may not, apply.

If you are considering developing existing leasehold property, either as a landlord or as a tenant, the wording of the lease will be paramount.

“Overall, on the construction of the lease, in the context of this transaction, and taking account of the ability of the freeholder in 1992 to grant a lease of the subsoil, in my judgment this lease does not include the subsoil beneath the Building. I quite accept that, in an urban context, where living space is at a premium, it may well be a reasonable use of natural resources to seek to create extra living space by digging down only a few feet, so improving the accommodation which already exists.

But this can only take place within the context of the legal rights which have been deliberately created by the parties or their predecessors in title. The mission – or a part of the mission – of property law is the allocation and management of resources, which requires (amongst other things) stability. Hence what governs is not what is reasonable in the circumstances. Instead, it is (within public policy limits) what is stipulated. The economics, however reasonable, do not control the law.

Thus, at the end of the day, in my judgment it is up to the freeholder whether this project can go ahead. If the freeholder asks too much by way of compensation, it will not. That would perhaps be a pity. But, under our property law, it is up to her. In the meantime, I conclude that Master Price reached the right conclusion, even if he expressed his reasons slightly differently. The appeal is accordingly dismissed.”
Posted by Jon Dickins at 15:11